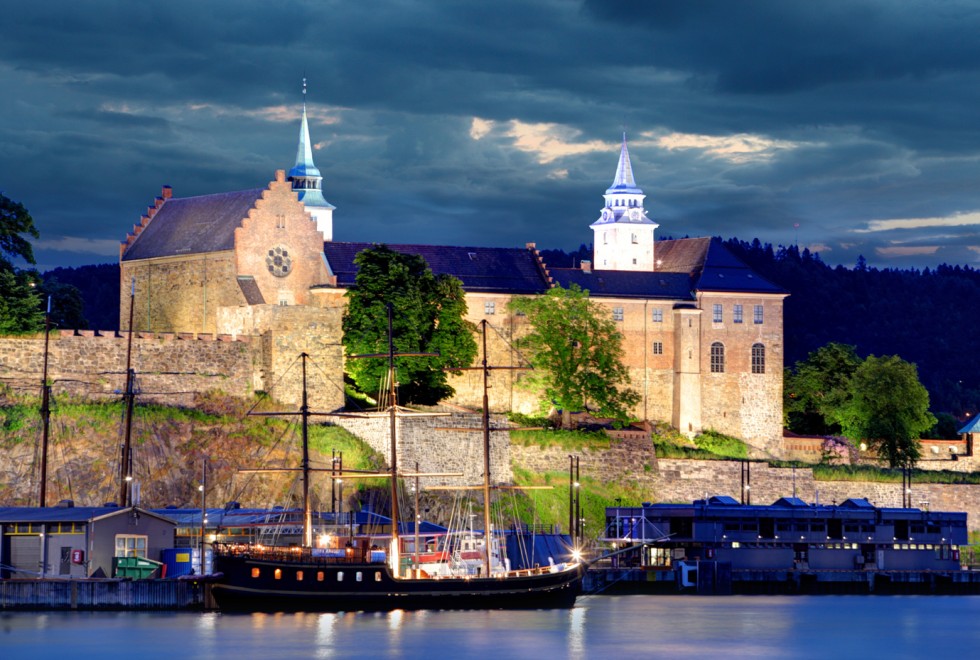 If you're visiting the capital of Norway then this is the things you must see, do and experience.

Norway, the land of fjords and Vikings, has a capital with 650 000 inhabitants. It’s name is Oslo, which nobody really knows what means. This somewhat tidy and small capital has boths sights and experiences that are truly worth the trip. 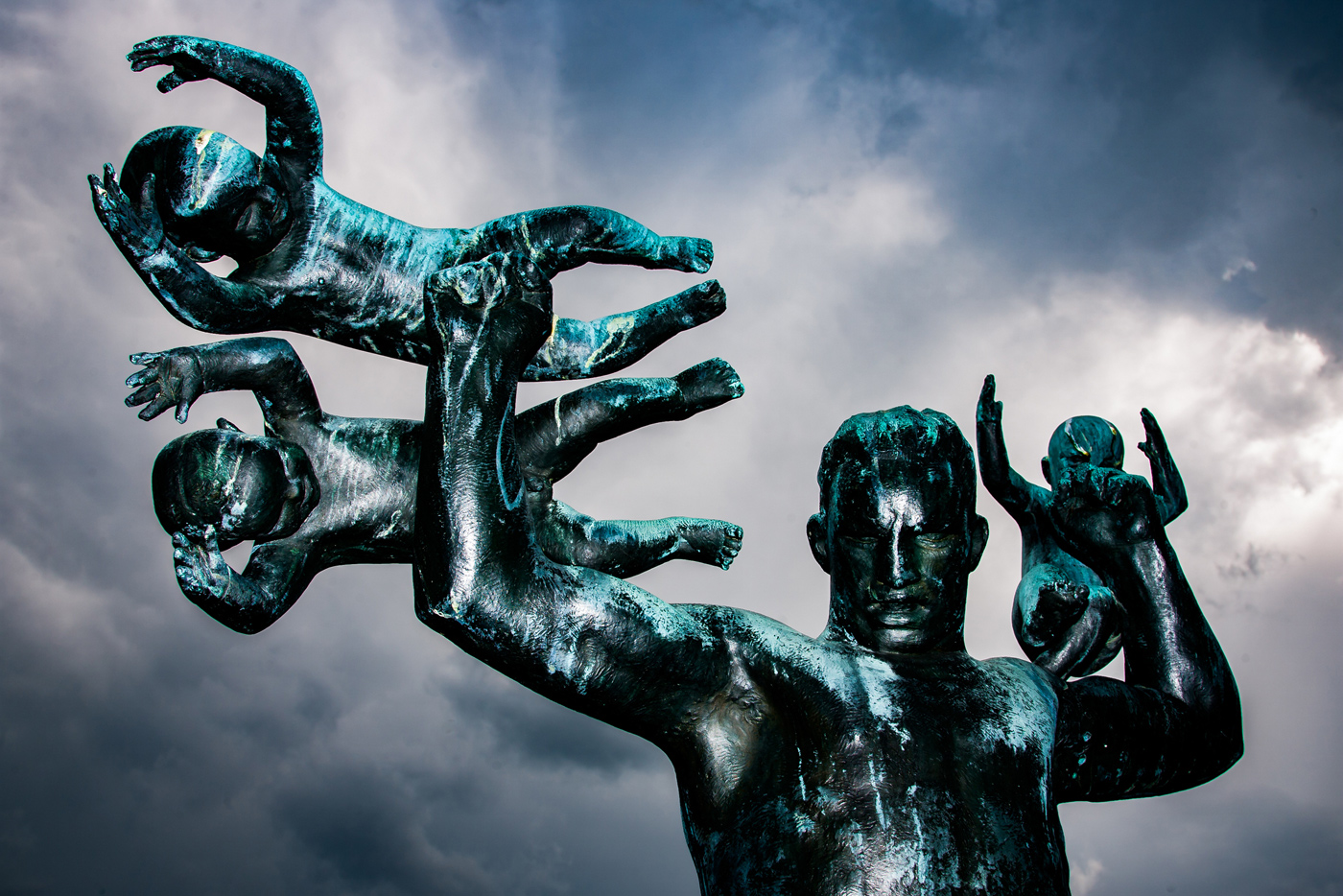 One of the sculptures in the Vigeland park. Photo: Paul Weaver/nabilder.no

The name of the park is actually Frognerparken with a part of it called Vigelandsparken, but it is known for the abundance of sculptures of extremely lifelike men, women and children. 200 sculptures in bronze are selfie-heaven. The museum gives you more of the art from Gustav Vigeland, but also other artists.

Inside the park you will also find Oslo Bymuseum, which also has a public restroom. This free museum shows the history of the city.

There are three places to eat inside the park, the Kafe Vigeland by the entrance and the two places by Oslo Bymuseum which are the best – but only open during the summer: Herregårdskroen and Frognerparken Cafe. One of the best restaurants in Oslo is near the park – Nodee. Also near the park you will find the largest THX-certified cinema in the world – Colosseum. In wintertime there will be ice-skating at Frogner Stadion. You can rent skates. 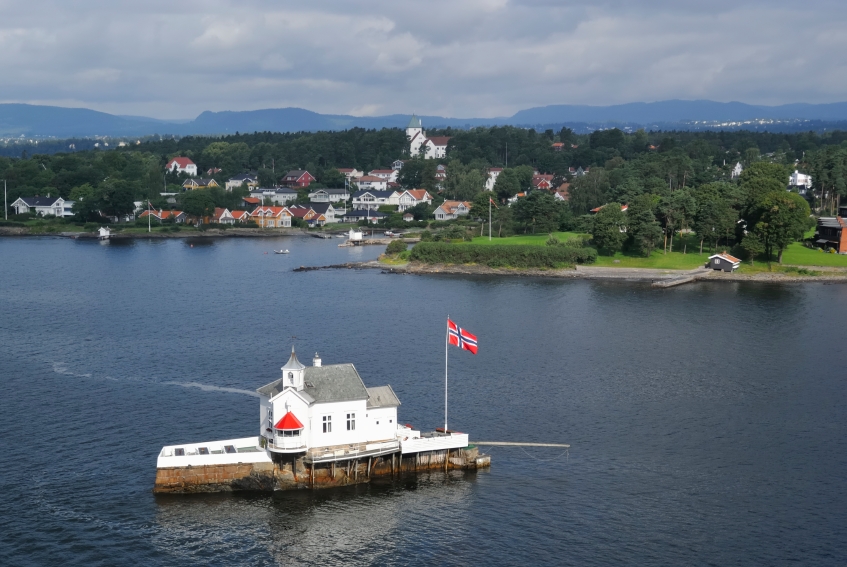 The lightouse is called Dyna Lighthouse. The lighthouse in front of Bygdøy is now used as banquet facilites.

This is not one attraction, but several. It’s the large open air museum that shows historical Norwegian buildings at Norsk Folkemuseum, it’s the Fram-museum which shows the history of the Norwegian Polar Expeditions, it’s the Kon-Tiki museum that holds the raft that crossed the Pacific Ocean, the Viking Ship Museum that olds old Vikingships, The Norwegian Holocaust Centre and the Norwegian Maritime Museum. By the way, take the boat to Bygdøy from city centre (Aker Brygge) in the summertime. 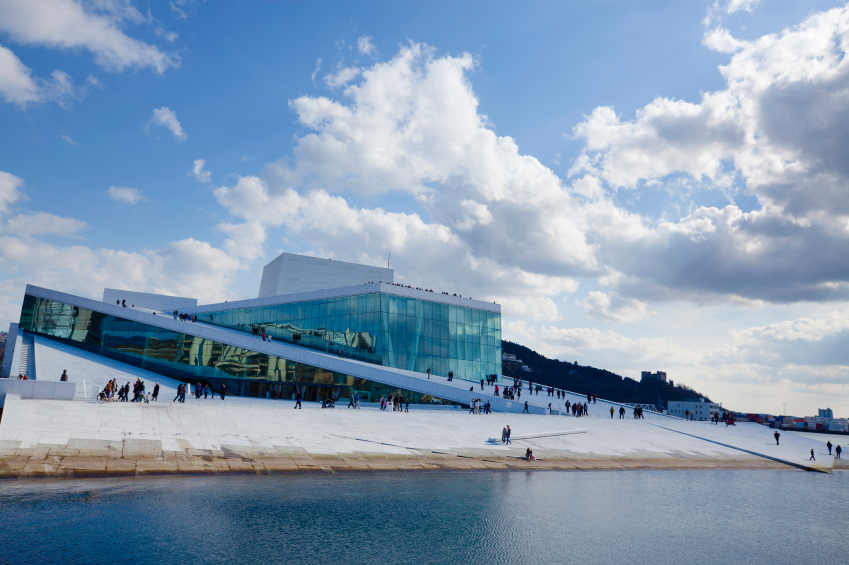 The Opera House is built upon a fake island in the Oslo fjord. The architects were Snøhetta.

Well, not the Opera as inside the Opera. You can, of course, if you like opera, but what should attract you to the building is walking on the roof to get a fjordside view of Oslo. Should you start somewhere in Oslo then this would be it. The cafe inside the Opera is insanely expensive, so bring a take-away coffee from Oslo Sentralstasjon (the train station).

This is a huge favourite for the young ones, and is the closest thing you will come to a theme park inside of Oslo. The museum is a hugely interactive experience with everything from original planes, trains and automobiles to models of the human body and much more. Even adults will be entertained by the old phones and all of the experiences, maybe so much that the kids will be left to fend for themselves inside the different exhibitions. It’s a bit off the centre of the city and therefore sadly overlooked by many, but you can actually take the train from the centre. It takes 12 minutes. Check it out here (you want to go from “Oslo S” to “Kjelsås”). The shop inside the museum is great, the cafe not so.

The Royal Castle behind the University. Photo GenN/nabilder.no

It’s a pedestrian shopping street like so many others, but the main interest for you as a tourist is starting at Egertorget which gives you a splendid view to the Royal Castle. Walking towards it you will pass the Stortinget (Big Thing) – the parliament of Norway. Down the street you will also pass TGI Friday’s (expensive), Hard Rock Café Oslo and other such establishments.

As a inside tip we’d recommend stopping at Paleet, one of the best shopping centre-like places in Oslo City Centre. If you like tacos you should eat at Taquiera, and if you like coffee you can buy one at Stockfleth’s which has operated as a coffee shop in Oslo since 1895. Looking down while walking you will see quotes from Henrik Ibsen in the pavement, and you will also pass the original building of the University of Oslo which now hosts the law studies (the other parts of the University is situated elsewhere). 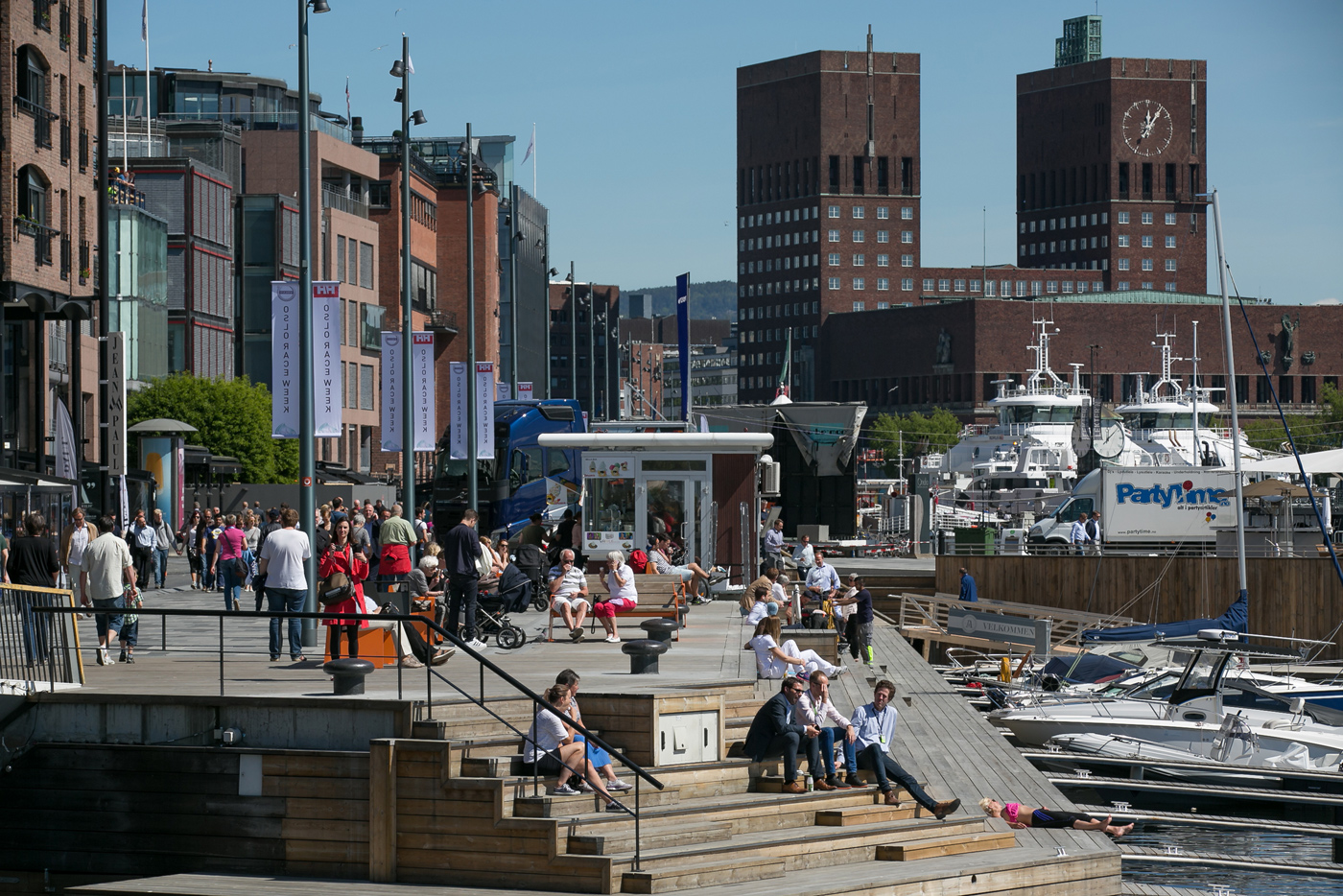 This is also an area. It starts with the Nobel Peace Center and ends with the Astrup Fearnley Museum of Modern Art. In between there are posh restaurants, shops, ice-cream in the summer, a public beach, some very nice scenery and much more in what used to be an old shipyard. Any way you slice it – Aker Brygge and Tjuvholmen is worth the visit.

This is the ski jump you’ll see from the center of Oslo, but it also much more. In the winter you can hire a sled and have a super time going down Korketrekkeren (The Corkscrew). You can also visit the Ski Museum. If you visit the nearby Holmenkollen Park Hotell you can eat very well, especially their wonderful Sunday brunch. It’s expensive, but worth every single crown (krone). Traditional Norwegian setting and food is also available at Frognerseteren. You can take the subway from city centre. 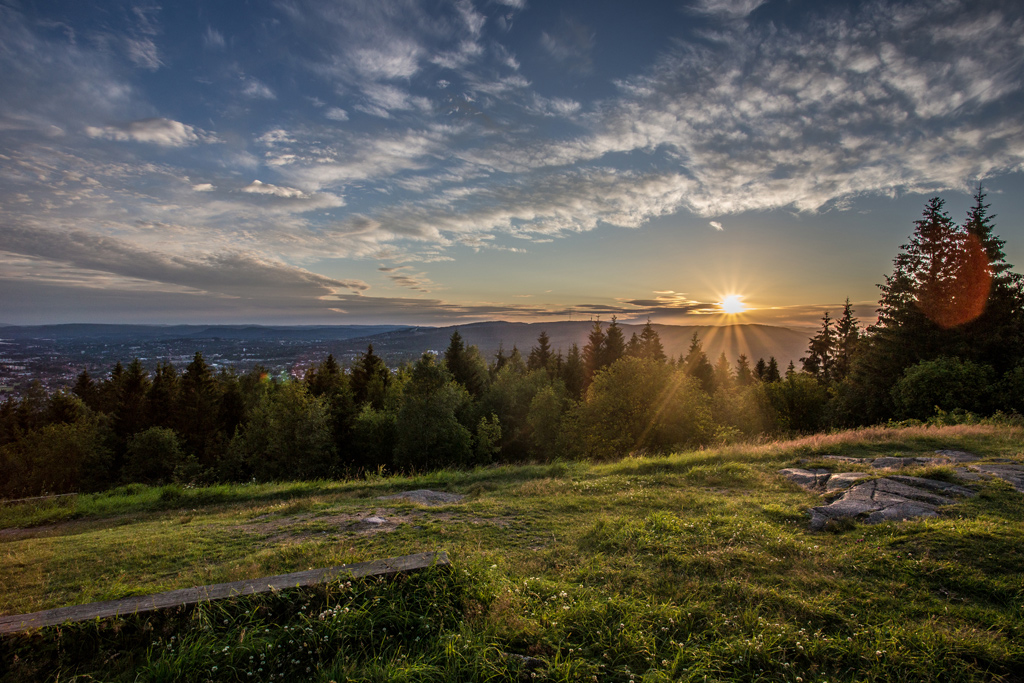 This is the huge forest north of Oslo, well to be more specific it’s IN Oslo. You can start around Holmenkollen, but if we should choose – and that is probably the point of a travel guide (to choose, that is) – we’d choose to start at Grefsenkollen and Trollvann. You can take the bus up here, and there is food (and expensive beer) to be had. The lake (Trollvann means troll-lake) is beautiful, summer and winter. And if you ever wanted to walk in what feels like an enchanted forest, this is it. 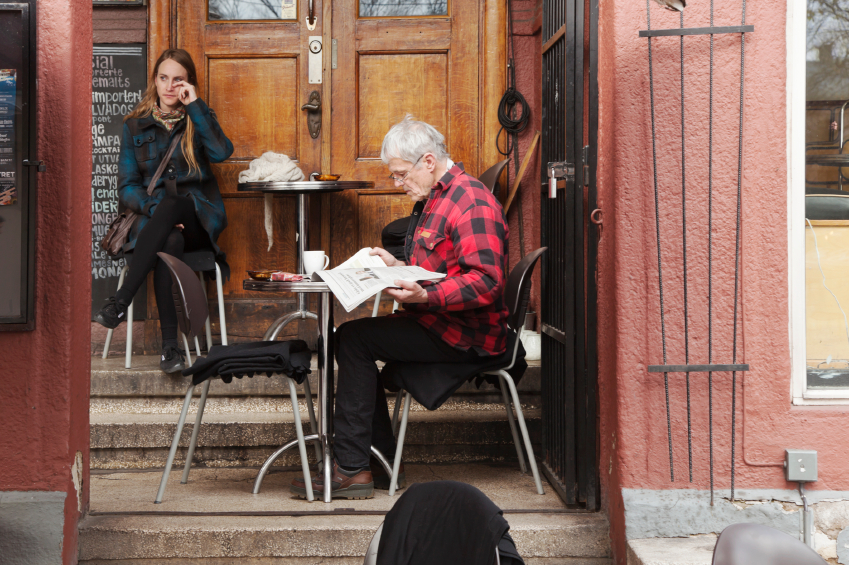 Grünerløkka is the closest thing you’ll come to the bohemian lifestyle of larger metropolitan cities, but it has been named one of the coolest places in the world by several magazines. Maybe it’s the coffee (try Wendelboe)

Hipster united over one part of Oslo, and Grünerløkka was it (don’t worry about the pronunciation, Norwegians don’t get it right either. The artsy feel of this working class-area (at least it used to be) maybe started with Edvard Munch living there. It’s not what many call gentrified with several small shops, pubs, bars, restaurants and, well, a McDonalds. You can get an excellent burger at Døgnvill Burger, and a real Italian pizza at Villa Paradiso. The coolest places change, follow the crowds – they won’t go to McDonalds. And, stop at Mathallen, a culinary heaven if there ever was one. 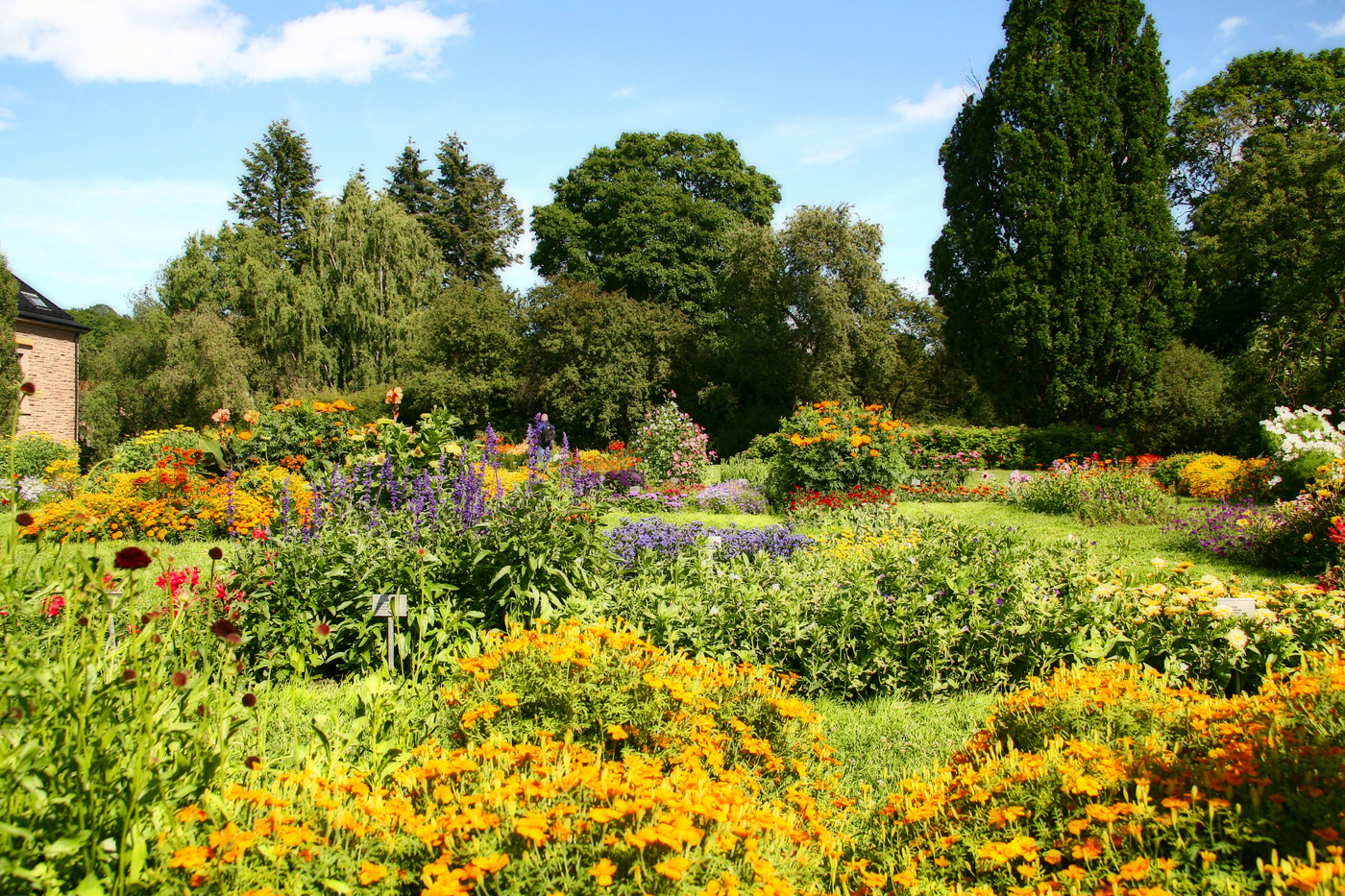 Edvard Munch, the Scream-guy, wasn’t from Oslo. He was born in Løten, which is also famous for it’s liquer (akevitt). He grew up in Christiania (which was the name of Oslo then), and his paintings are many from parts of Oslo. The big Munch-museum maybe moved, but at the moment it’s situated right next to the Botanical Gardens of Oslo (with the Natural History Museum). Both in the eastern part of the city centre. A bit too far to walk, but the subway takes you there. 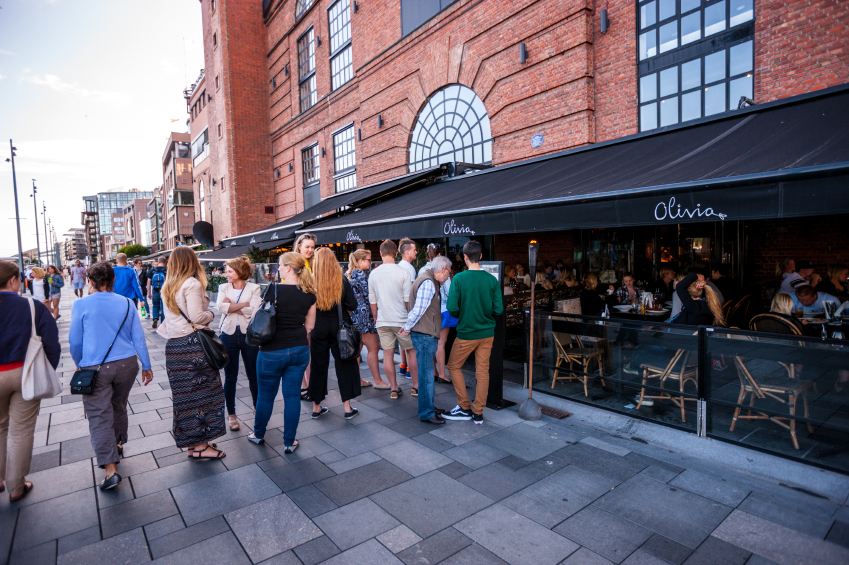 Like Spinal Tap our list goes to 11. This is number 11. The best outdoor dining – Olivia. Pizza and pasta. 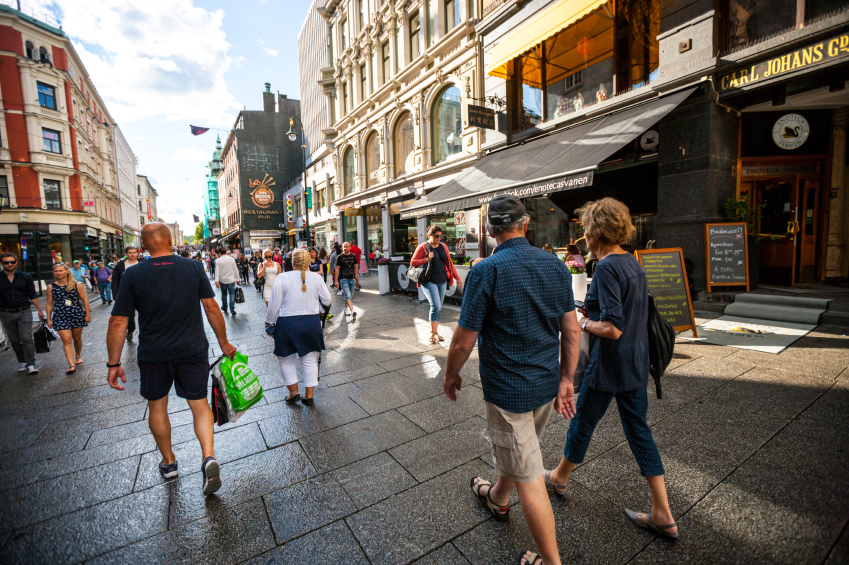 There are several places you can buy overpriced alcohol in the city centre of Oslo, but a tip is to try to get away from the places in and around Karl Johansgate. 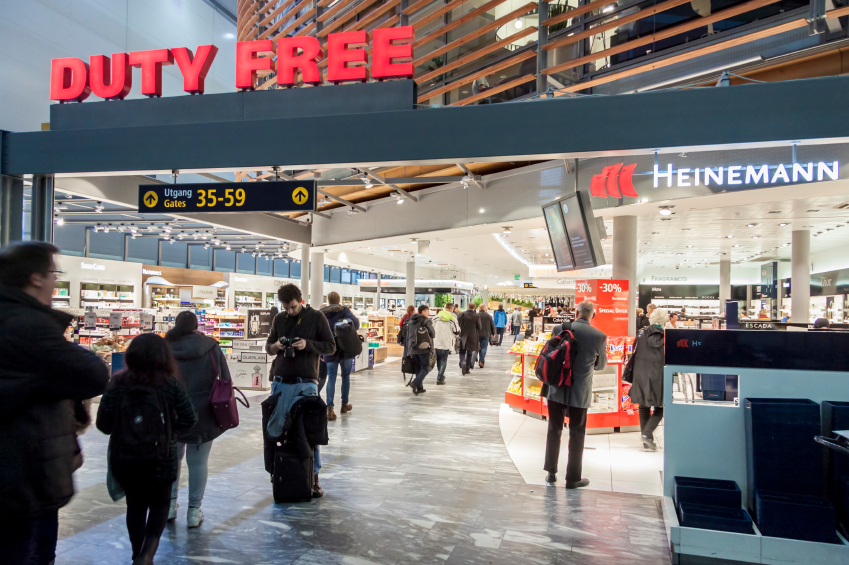 Maybe the greatest shopping that you’ll do in Norway will be at the duty free at the airport, but there are several great places to at least browse inside of Oslo.

On the hightes point of Karl Johan, Egertorget, you get a view of the castle. More important shoppingwise you’re only steps from Louis Vuitton, Mulberry, Hugo Boss, Gucci, Hermés and several other high-end brands, in addition to the upscale shopping you’ll find at Eger. It’s also convient that this smack down in the city centre, you’ll pass it any way you slice it if you visit Oslo.

Trick. I’s the only place you CAN buy wine. Beer (up to 4,8%) is sold in grocery shops, but not wine. Or Liquer. There is several branches of Vinmonopolet in Oslo. 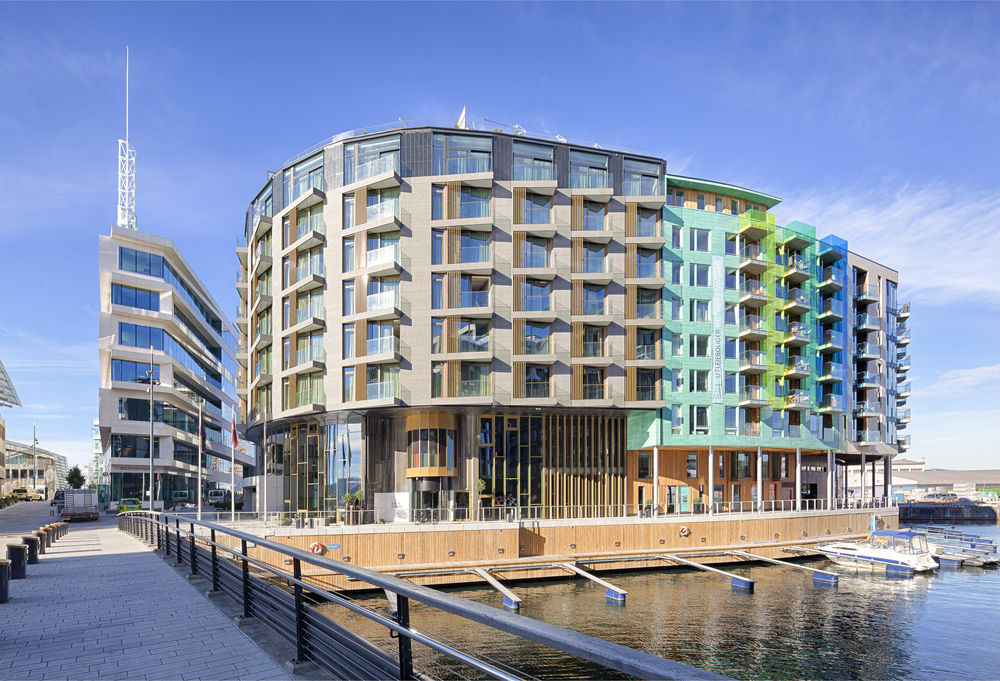 Read: 42 things every foreigner must know about Norwegians