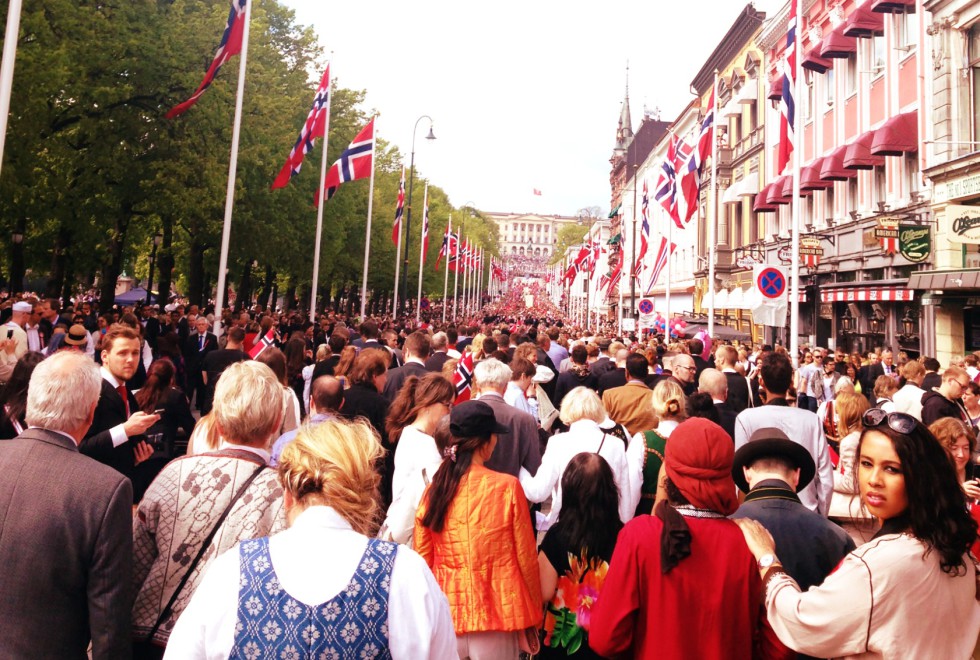 The seventeenth of May is a day like no other

Every nation has a national day (we will all agree) but probably very few of them are so enthusiastically and uniquely celebrated like May 17th. It commemorates the date when the Norwegian Constittion was signed in Eidsvoll on May 17, 1814. If you plan or are about to experience the celebration of Norway’s national day for the first time, it makes sense to be prepared. It is a joyful and rather rambunctious affair, and definitely a celebration you should be joining.

What a great historical costume drama

It has the usual parades, bands, street parties and food stalls you’d expect, plus a healthy dose of patriotic singing and flag waving. This is the only day children are allowed as much ice-cream as they want, and Oslo’s half a million inhabitants come out in the droves. But the twist is all in the togs.

Walk out of your door on the big day and you’ll feel as if you have accidentally stumbled onto the set of a historical costume drama, with everyone dressed head to toe in national costume, bunad. Most women bustle about in vibrant floor-length woollen dresses, their laced-up bodices adorned with intricate embroidery and silver jewellery. Little boys run around in plus fours and woollen waistcoats to match their fathers. Norwegian who don’t wear national dress pin 3 ribbons (red, blue and white to represent the flag) to their jacket so it’s close to their heart. The graduating high school students, russ, wear traditional fishermen’s overalls in fire-engine red and peacock blue, and celebrate the approaching school year’s end. OK, the effect is disconcerting at first and then, frankly, wonderful as everyone takes part and the city is completely transformed.

Don’t worry if you’ve not got the gear, and certainly don’t try to buy an outfit for the occasion as they cost hundreds (if not thousands) of euros and are passed down in Norwegian families from generation to generation. Just steer clear of jeans and wear something nice and you’ll blend right in. Our best advice is to go with the flow, join the festivities, and most of all, bow and nod to the waved greetings of the royal family from the balcony of the Royal Palace.

You will perhaps be woken up…

..at 7 am by cannon fire announcing the start of the day…GREATt! Most Norwegians will start the day with a champagne breakfast with close family and friends, and later join the joyous revelry all around. One of the things that will make a great impression on you is the abundant usage of the Norwegian flag. Pretty much every house will fly the Norwegian flag on the 17th May, every place is decorated with it, even every baby stroller and puppy. It is literally everywhere.

The Constituent Assembly at Eidsvoll in 1814 that voted the Norwegian Constitution and formalised the dissolution of the union with Denmark (painted by Oscar Wergeland).

Understanding of all these 17th of May traditions reguires some historical and social background knowledge.

The 17th of May was established as a National Day in 1814 as the Constitution of Norway was signed in Eidsvoll, declaring Norway as an independent nation. However, Norway was under Swedish rule at that time, and for a few years during the 1820s, King Karl Johan actually banned it, believing that celebrations like this were in fact a kind of protest and disregard- even revolt- against the union. This prohibition triggered a higher level of ambition towards Norwegian independence, and the king’s attitude changed after the Battle of the Square in 1829, an incident which resulted in such a commotion that the king had to allow commemorations on the day.

During the 1860’s, 17th of May became more established, and it was a celebration for the children rather than a day of patriotic pride. Originally the day focused only on the Norwegian constitution but after 1905, the focus had been directed also towards the royal family.

You can read the Norwegian Constitution her

Excited already to experience The Norwegian National Day? We definitely are.